[Support This Blog: *Patreon*] I am a progressive (on most issues). I am not a liberal. IF YOU CAN'T HANDLE THE DISCOURSE, THEN DON'T ENGAGE IN IT! I am very mistrustful of mainstream media. So posting an article does not mean I endorse the source, or that I agree with all aspects of the article. If I do post an article I really disagree with (not uncommon for me to do), I try to say so (in the tags, at the very least), but sometimes I forget. I wish I had the time to write up well thought out responses to articles, but unfortunately, that's just not possible right now. And just FYI: not a lot of thought goes into my tag commentary. Also, tumblr sometimes autofills tags on posts. I don't have time to manually delete all of the autofilled-tags. So I can't swear to their accuracy. All my relevant commentary is tagged with the #me tag. I can be extremely aggressive, honest, and impatient. Satirical posts are tagged with the #satire tag. Posts are scheduled throughout the day. I do my best to schedule posts, but sometimes I make a mistake. So if you see a post with a deadline or date that's passed, it's probably because I made a mistake when scheduling it. Attempts to tone police me are not welcome. If you don't like the way I format my posts, or the content I choose to highlight, then leave. I do block blogs that don't appear to be run by an actual person (this is roughly 50% to 75% of all blogs that follow me). This includes porn blogs, blogs that are attempting to sell you something, etc. Blocking REAL accounts is a very rare occurrence. If I do block, these are the general guidelines. If you're responding to my posts with troll-like comments, saying the same shit over and over again, or making it difficult for me to get through my activity feed by clogging it up, then I may block you. Disagreement is fine, but if you're engaging in death threats, inciting violence, excusing violence, being pro-violence in any way, engaging in hate speech, doxxing, etc., then I may block you. If we're having a debate, please actually respond to my replies. Don't be shady and try to hide my replies. If you reblog my posts, DO NOT edit or delete anything I write. I don't care if it's just the excerpted part of the article I include, or my own commentary. If you want to reblog my article without the excerpt, then please just copy the link to the article and post it to your own blog. DO NOT PLAGIARIZE ANYTHING I WRITE. I don't care if it's my tag commentary or whatever. If you want to use my words, all you have to do is cite me. Do not advertise or promote your blogs/products/services on my posts. Blocks may be temporary or permanent. If I accidentally blocked you, please feel free to message me on one of my other blogs (listed below) and I can unblock you. Some of my other relevant blogs (the ones I update regularly): Mel-Esprit Politics-Junkie My goodreads account: Here.
Post on Tumblr
Follow on Tumblr
Twitter
Pinterest
WhatsApp
Facebook
E-Mail
LinkedIn
Reddit
VK
Telegram
>12346>

This is a snapshot view of original blog at news-queue.tumblr.com 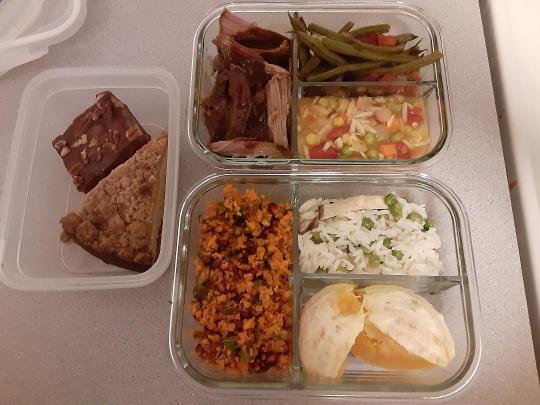 Here’s the next installment in the series: “What I Pack For My Boyfriend’s Lunch”. I’m responsible for all the meal preparation...

@midnightfunk mentioned you in a photo:

@politics-junkie Bernie didn’t win the nomination. Warren didn’t either. Clinton did and #45 managed to convince enough people that he’d be better till he executed the outdated relic of slavery aka the electoral college. At the end of the day one question stands: who will be better for America. In no reality is that the insecure man-child currently defiling the office. Whatever issues you have with Biden: LOOK AT THE ALTERNATIVE. It’s unacceptable.

I’m posting this on my other blog, because I’m on here the most, and it’s easier to monitor (most) conversations.

First of all, if you want to start a conversation, actually REBLOG the posts. Replying without reblogging is a shady debate tactic, because it takes away context. People can’t see what you’re replying to.

For context: this is the horribly offending thing I had the audacity to say (it was in response to a post that said Joe Biden appeals to a lot of black voters because he was VP to a black man and never tried to “stab him in the back”):

This “he was respectful to his boss” mentality is stupid and doesn’t matter.

I’d have more respect for Joe if he had stood up to his boss (who happens to be black) and oppose him when he wanted to start more wars and bomb more hospitals, killing more BROWN people.

Vote for Joe all you want. It’s either him or Trump, and we all know Trump is worse.

But don’t sit there and sanitize Joe’s record, make him out to be some well-mannered dude, when he’s not.

You’re lecturing me about how Trump is worse (”At the end of the day one question stands: who will be better for America”), but I literally said IN MY RESPONSE that Trump was worse. You’re lecturing me that Bernie and Warren lost (also, just FYI, I’m not a Warren supporter, so not sure why you’re even mentioning her), but it should be obvious I already know that because, you know, I literally say, “It’s either [Joe] or Trump.”

Believe it or not, you can be critical of someone and still think they’re the overall better candidate. In fact, if that’s the case, then the only ethical thing to do is to actually address that.

I’m talking about a candidate’s racism, and all you can scream at me is basically, “But Biden is better,” even though I literally said Biden was better. Do you think I’m lying, or did you just not read what I said? Or maybe, what bothers you is that I’m talking about Biden’s racism, which you don’t actually want to address (because you think it will hurt his chances). Which is…pretty racist. Reminder to everyone: it’s not enough to be non-racist, you need to be anti-racist. And giving someone a pass because “the other guy” is worse is extremely problematic. (I mean, can you imagine how fucked up the world would be, if everything operated like that? Rape 19 women, but no one will say anything, as long as there’s a guy out there who raped 20.)

If you want Biden to have the BEST shot at winning, then I suggest you get to work pressuring him to stop saying and doing racist shit, which like it or not, WILL turn off a lot of voters. I mean, why are you helping Trump? You do realize that’s what you’re doing, when you refuse to pressure Biden to be better, right? You do realize this tactic of wagging your finger in the faces of POC who have legitimate issues with Biden’s racist history is really ineffective, right? STOP HELPING TRUMP.

Again, I don’t want Trump to win. But I also don’t like the sanitizing of Biden’s record. If someone is a racist, then call them a racist. And actually make it about them. You don’t need to bring up other, worse racists. Doing that only serves to hijack and derail a conversation that we need to have. If you don’t want to have it, then simply don’t take part in it. But Biden’s racism (and all his other atrocious qualities) affects me / us. It will affect us even MORE if he’s President (which of course, he should be because he’s better than Trump).

@midnightfunk mentioned you in a photo: @politics-junkie Bernie didn’t win the nomination. Warren didn’t either. Clinton did and... 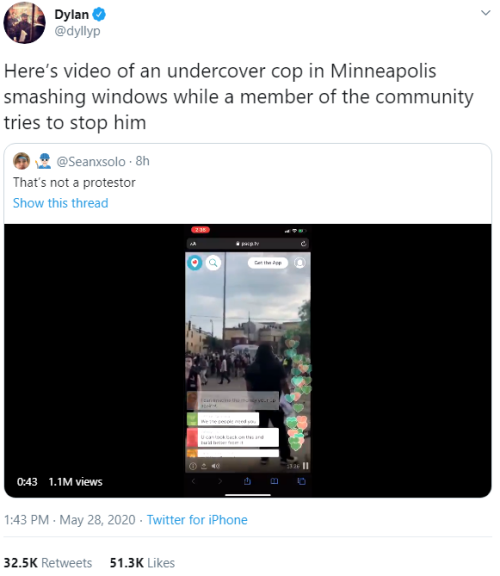 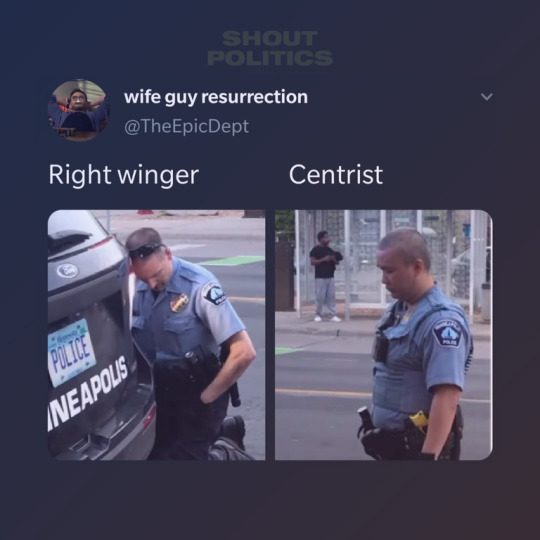 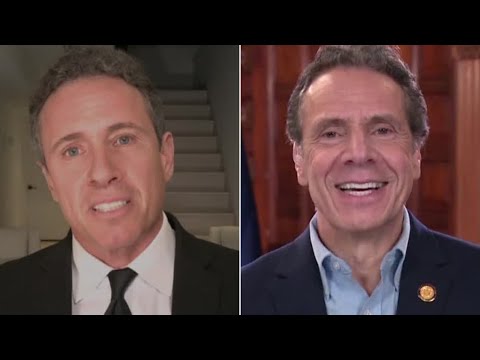 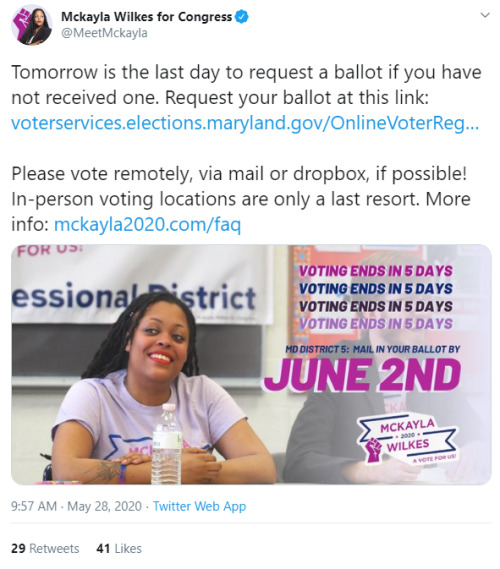 During a CNN interview with CNN's Dana Bash, Joe Biden expands on his comments about Black Voter Support.

The Young Turks’ Emma Vigeland (https://Twitter.com/EmmaVigeland) explains why riots in response to George Floyd's killing are a...